Business Insider and several other news organizations have this year identified 52 members of Congress who’ve failed to properly report their financial trades as mandated by the Stop Trading on Congressional Knowledge Act of 2012, also known as the STOCK Act.

Congress passed the law in 2012 to combat insider trading and conflicts of interest among their own members and force lawmakers to be more transparent about their personal financial dealings. A key provision of the law mandates that lawmakers publicly — and quickly — disclose any stock trade made by themselves, a spouse, or a dependent child.

But many members of Congress have not fully complied with the law. They offer excuses including ignorance of the law, clerical errors, and mistakes by an accountant. Insider has chronicled this widespread nature of this phenomenon in a new project, “Conflicted Congress.”

While lawmakers who violate the STOCK Act face a fine, the penalty is usually small — $200 is the standard amount — or waived by House or Senate ethics officials. Ethics watchdogs and even some members of Congress have called for stricter penalties or even a ban on federal lawmakers from trading individual stocks, although neither has come to pass.

Here are the lawmakers who have this year violated the STOCK Act — to one extent or another — during 2021:

Feinstein was months late disclosing a five-figure investment her husband made into a private, youth-focused polling company.

Tuberville was weeks or months late in disclosing nearly 130 separate stock trades from January to May.

Marshall was up to 17 months late disclosing stock trades for one of his dependent children.

Paul was 16 months late in disclosing that his wife bought stock in a biopharmaceutical company that manufactures an antiviral COVID-19 treatment, the Washington Post reported.

Kelly, a retired astronaut, failed to disclose on time his exercising of a stock option on an investment in a company that’s developing a supersonic passenger aircraft, Fox Business reported.

Lummis was several days late reporting a purchase in August of up to $100,000 in bitcoin, CNBC reported.

Malinowski failed to disclose dozens of stock trades made during 2020 and early 2021, doing so only after questions from Insider.

The independent Office of Congressional Ethics, in part citing Insider’s reporting, found “substantial reason to believe” that Malinowski violated federal rules or laws designed to promote transparency and defend against conflicts. It voted 5-1 to refer its findings to the Democrat-led House Committee on Ethics, which confirmed on October 21 that it will continue reviewing the matter.

Fallon was months late disclosing dozens of stock trades during early- and mid-2021 that together are worth as much as $17.53 million.

Harshbarger failed to properly disclose more than 700 stock trades that together are worth as much as $10.9 million.

Lee failed to properly disclose more than 200 stock trades between early-2020 and mid-2021. Together, the trades are worth as much as $3.3 million.

Clark, one of the highest-ranking Democrats in the House, was several weeks late in disclosing 19 of her husband’s stock transactions. Together, the trades are worth as much as $285,000.

Moore in early- to mid-2021 did not properly disclose dozens of stock and stock-option trades together worth as much as $1.1 million. He was late again disclosing trades made in August.

Sherrill was months late disclosing two sales of vested stock her husband earned as part of his employment. The trades were worth up to $350,000 and Sherrill paid a $400 late fee.

Brooks, who is running for US Senate, failed to properly disclose a sale of Pfizer stock worth up to $50,000.

Crenshaw was months late disclosing several stock trades he made in the early days of the COVID-19 pandemic, the Daily Beast reported.

Hern did not disclose nearly two-dozen stock trades in a timely manner, in violation of the STOCK Act. Taken together, the trades are worth as much as $2.7 million.

Wasserman Schultz was months late reporting four stock trades made either for herself or her child.

Guest was more than eight months late disclosing trades in the stock of two oil companies held by a family trust benefitting his wife.

Maloney was months late in disclosing he sold eight stocks he inherited in mid-2020 when his mother died.

Mast was late disclosing that he had purchased up to $100,000 in stock in an aerospace company. The president of the company had just testified before a congressional subcommittee on which Mast sits.

Trahan was months late disclosing the sale of stock shares in a software company.

Rutherford failed to properly disclose five individual stock transactions he made in late 2020.

Trone was months late reporting several stocks and structured notes that together are worth well into the hundreds of thousands of dollars.

Meuser was about one year late disclosing hundreds of thousands of dollars worth of stock purchases his wife and children made during March 2020, LegiStorm reported.

Castor was late disclosing the purchase of tens of thousands of dollars worth of stock shares throughout 2021.

Pascrell was overdue reporting stock trades he made in December 2019 in General Electric and in August 2019 in pharmaceutical company Johnson & Johnson.

Pfluger was several months late disclosing numerous stock purchases or sales made in January or March either by himself or by his wife.

Higgins was about 11 months late disclosing three stock trades he made in late 2020.

Bustos was months late in disclosing that she had sold up to $150,000 worth of stocks in March.

Chabot was months late disclosing a stock share exchange he held in early 2021.

Spartz was two weeks late disclosing a purchase of up to $50,000 worth of stock in a commercial real-estate firm.

Allen, a four-term Republican who represents a large southeastern region of Georgia, appears to have improperly disclosed the purchases and sales of several stocks during 2019 and 2020.

Schrier was more than two months late disclosing that her husband purchased up to $1 million in Apple Inc. stock, Sludge and Forbes reported. Schrier’s office told Insider that the congresswoman was initially unaware of the transaction.

Kelly was more than seven weeks late reporting a stock purchase made by his wife.

Scott, a Republican from Georgia, was a week late reporting a handful of transactions conducted by his spouse.

Sessions was a month late in reporting a purchase of stock in Amazon.com.

Perlmutter ran a few days late in filing disclosures for as much as $30,000 in stock trades his wife made in June.

Fleischmann, a Republican from Tennessee, was late in disclosing a pair of stock transactions together worth up to $30,000.

San Nicolas did not properly disclose two trades — one in 2019 and another in 2020, reported NPR, citing Campaign Legal Center research.

Welch, an outspoken environmentalist, was late disclosing the sale of his wife’s ExxonMobil stock.

Banks was a week late reporting a handful of stock transactions.

Garcia was late disclosing several stock trades he made in mid-2020, as first reported by the American Independent.

Wittman was a few days late in disclosing four of his stock transactions that included pharmaceutical company Johnson & Johnson.

A corporate bond provides companies with cash and investors with income — here’s how to evaluate the risks and rewardsA corporate bond is issued by a company to raise money; like any debt, it pays investors regular interest and a return of principal when it matures.Read more 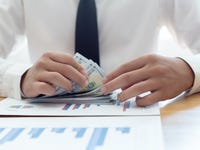 in cloud computing and technology company VMWare, worth between $15,001 and $50,000, Forbes reported. “We have no comment,” Lowenthal spokesman Keith Higginbotham told Insider on November 18.

Hagedorn was more than three months late disclosing the sale of stock in a company that makes colon cancer-screening products.

* This article was automatically syndicated and expanded from Business Insider.

The ad is not displayed on the page

Find solutions in the manual

Join Aspiration – a financial firm
with a conscience!

For a limited time, sign up at the above
link and get $50 cash and $25 to donate
when you spend $250 within 60 days
using your Aspiration debit card.

Use your own phone or get a free
smartphone with unlimited talk & text,
plus 3 GB high speed LTE data per month!

See if you qualify today.